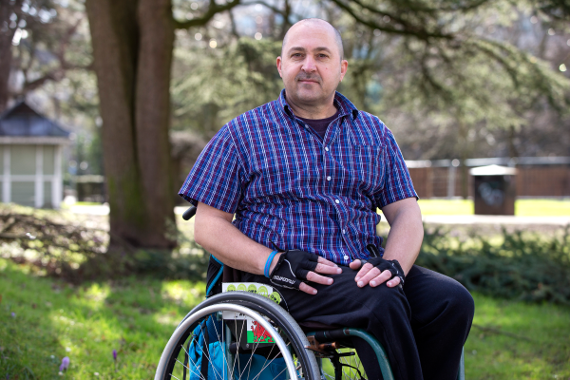 A man with a rare brain condition, Alan Thomas, from Llanboidy in Carmarthenshire, has signed up to HealthWise Wales after he was "isolated and frustrated" by the lack of information when he was diagnosed with his own illness. Alan was diagnosed with Cerebellar Ataxia, a condition which affects limb movement and speech, 20 years ago.

"I've always walked with a wobble and slurred but when I was 30, I was buttering bread and realised I had to think about where I placed the knife, and I knew that wasn't right." Alan was eventually sent for MRI and lumbar puncture tests, which showed he had ataxia, a condition thought to affect around 300 people in Wales.

The 50-year old who uses a wheelchair, had to give up his job as an electrician, had never heard of the condition and says he was frustrated and isolated by the lack of information he found. "As well as dealing with the symptoms like exhaustion and impaired movement, I couldn't find any help for dealing with my condition."

Alan made it his mission to help others with ataxia, setting up a website (AreYouAtaxiaAware.Wales) last year where other people in Wales share information on their condition. He is now hoping more ataxia sufferers will register with HealthWise Wales to help research into the condition and raise awareness around its symptoms.

"I got involved with HealthWise Wales as I'm a patient with a rare condition and I know that research can't happen without the input of people like me. I'm not content to sit around waiting".