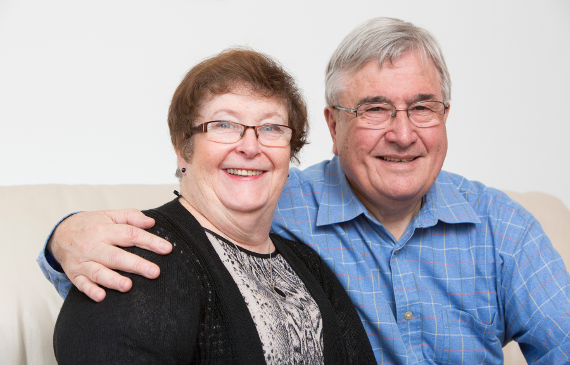 A Bridgend grandfather, Brian Davies, 68, who recovered from a paralysing nervous system attack has signed up to Healthwise Wales aiming to help others. Retired management consultant, Brian, suddenly contracted Guillain-Barré syndrome, a rare and serious condition of the peripheral nervous system, in 2002. He was paralysed from the neck down for three months, and spent three years off work recovering.

"I was walking down the stairs, and suddenly lost my balance and fell. I couldn't feel my arms or my legs, and it was really terrifying. My GP was able to diagnose me very quickly. I spent three months in hospital before I started recovering, but had no idea how long it would be until I got the feeling in my limbs back again. It's a rare disease, and I'd never heard of it before. It's incredibly scary for anybody going through it."

In addition to suffering with Guillain-Barré, Brian, who is married to a retired special needs teacher, has experienced a number of personal ordeals. Twenty years ago he suffered a nervous breakdown as a result of clinical depression. Then three years ago he lost his eldest son which devastated the family.

Brian says his experiences have made him determined to protect the health of his family including his three young grandchildren, one of whom has Kleefstra Syndrome, a rare genetic disorder.

"Losing my son was a tragedy, and I wouldn't wish it upon anybody. We're a tight knit family, and it was the worst experience of our lives. We have been through so much, but have had wonderful support from the NHS, support groups and the Bridgend Tenovus choir we sing with. My wife has spent her career teaching children with learning disabilities. Our own grandchild has a disability, and we want to protect people like her. We may not meet our grandchildren's children, but we want to feel like we have given something back to the community, and future generations as much as we can."