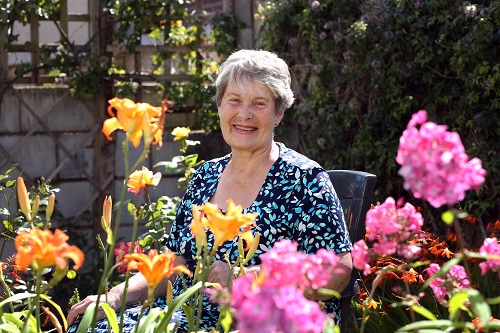 A Denbighshire great-grandmother who was diagnosed with cancer has joined a unique health research initiative in Wales to fight against major diseases and is urging others to do the same.

78-year-old Georgine Gray from Rhuddlan near Rhyl has signed up to HealthWise Wales, a flagship Welsh study aiming to better understand the health and wellbeing of the nation, to develop better treatments for conditions such as cancer.

People aged 16 and over and living in Wales are being asked to take 10 minutes to complete an online survey as part of HealthWise Wales, a project led by Cardiff and Swansea Universities and backed by the Welsh Government.

It is the first scheme in Wales to build a picture of future health needs. It collates detailed health and wellbeing information from people of all ages and backgrounds.

This information will then be used to plan future health services and invite people to take part in further relevant health research on specific conditions and their management and treatment.

Three months later, Georgine had an operation to remove four centimetres from her kidney to remove the cancer. In December of the same year, doctors also discovered lymphoma in her tonsils after an operation.

Following chemotherapy and radiotherapy treatments, Georgine's cancer has been in remission for around four years.

She said: "I was lucky enough not to suffer any ill health until I turned 70, and then it seemed like everything hit me at once. Thankfully both cancers were caught very early on, with the kidney cancer found when I was having a scan before a hysterectomy.

"2011 was a very difficult year for me, and I'm so grateful I had such a supportive family and amazing care at Ysbyty Glan Clwyd. Looking back, I realise how poorly I really was. I tell everyone about my experience, even people I don't know, because I want to show them that being diagnosed with cancer isn't the end of your life. My goal is to be able to help people through it, and let them know that there is hope.

"It's important to me that as many people as possible sign up to the initiative. When I went to the doctor with pain in my stomach, and later in my throat, I never expected it to be cancer, so I want more people to know about these illnesses and to take part in the study to ensure that the research exists to help others in the future."