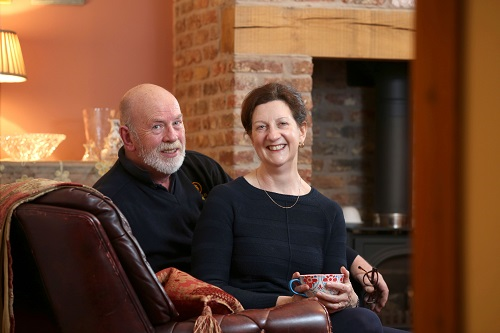 A mother of two from Wrexham who suffers from a rare form of non-aggressive gynaecological cancer has joined a unique health research initiative in Wales, and is urging others to do the same.

Fifty-four-year old Helen O'Sullivan has signed up to HealthWise Wales, a flagship Welsh study aiming to better understand the health and wellbeing of the nation, to help researchers develop better treatments for a range of conditions.

People aged 16 and over and living in Wales are being asked to complete short questionnaires every six months as part of HealthWise Wales, a project led by Cardiff and Swansea Universities and backed by the Welsh Government.

It is the first scheme in Wales to build a picture of future health needs. It gathers detailed health and wellbeing information from people of all ages and backgrounds which will be used to plan future health services.

Helen collapsed at home on her 31st birthday and was rushed to hospital where doctors discovered a large mass on her right ovary which they originally thought was a cyst. However, after operating they discovered that Helen was suffering from low grade malignant ovarian granulosa cell tumour (GCT).

On her 50th birthday, the pain retuned once again and, like before, she was taken to hospital and discovered the same tumour had been growing. After an intensive consultation involving different departments, the mass was removed and Helen was advised to come back every six-months for review. Helen will need to attend these six-monthly appointments for the rest of her life through the support of the NHS.

"Throughout the years, my family have really stepped up to the plate. I have quite honestly got the best husband in the world and without the support of him and my two children it would have been a lot harder to get through."

Helen signed up to HealthWise Wales after seeing it advertised in the media and believed that this could be her way of giving back, after receiving years of support from the NHS.

She said: "HealthWise Wales allows you to have your say in what health services are available. By telling them what's needed, they will have a clearer idea on how to help plan our future health needs. My message to others is to just to sign up now."