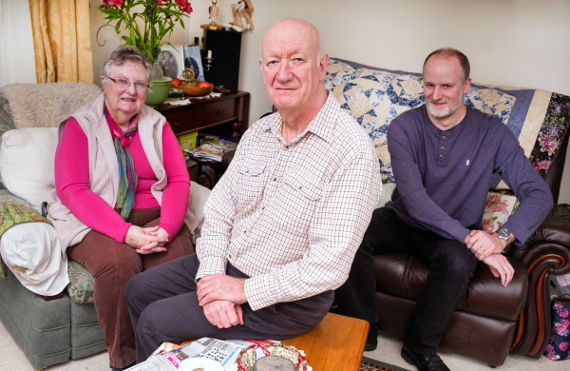 Martyn Vaughan, a Newport grandfather with a hereditary heart condition has joined HealthWise Wales after losing his wife and father to genetic diseases, and undergoing major heart surgery himself.

Martyn, who has worked as a steel worker, laboratory technician and a civil servant, was diagnosed in 2014 with bicuspid aortic valve disease, a condition where sufferers have two heart valves instead of three. The father of two had an open heart and triple bypass operation at the same age (67) as his dad who experienced a succession of heart attacks and died.

"I was diagnosed with a heart murmur in 2004, but experienced severe pain last year and was urgently admitted into hospital", he said. "My father passed away from a heart attack when he was 67 so my being admitted to hospital for heart related issues at the same age was very traumatic, for my family."

The passing of Martyn's father was the second family death related to a hereditary disease. His first wife died aged 52 from a diabetes related condition, which also affected her brother.

"My wife's death was a shock to us all", he recalls. "However, it has made me realise how important research into family history is, as we had no idea she was susceptible to diabetes until it was too late."

Martyn, has remarried and has five grandchildren aged between six months and 13 years. He says his priority is protecting the health of his family, and hopes more families will sign up to HealthWise Wales.

"My twin sons both have high cholesterol, and at 44, are very aware of how serious it can be. One is trying a healthy diet, and the other is on medication. However they deal with it, I just want them to look after themselves and their children who may also be prone to heart conditions. HealthWise Wales is really important for families like ours, and will hopefully help to change lives."