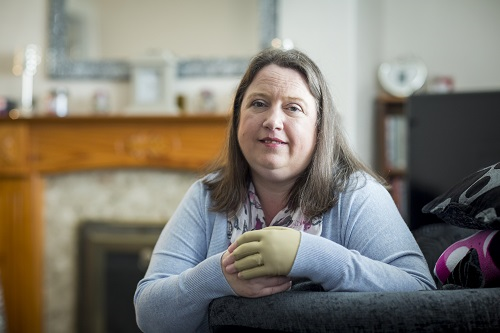 A Tenby mother who suffers from Psoriatic Arthritis has joined HealthWise Wales and is urging others to do the same.

However, a side effect of the treatment is that it can mask other medical illnesses and, in 2016, Tracey nearly died after her gallbladder became infected and was on the verge of sepsis.

Due to the severity of the condition, Tracey had to have an eight-hour operation to remove her gallbladder and she was told by doctors that she would not have survived the weekend without the operation.

"When my illnesses flare up, which normally happens every six months or so, it's so severe that I can barely leave the house. The last three years have probably been the worst but luckily my family and friends are hugely supportive - they've even helped spoon-feed me my Christmas dinner when I was too ill to feed myself."

"I'm on morphine and steroids every day and I had several toes amputated a few years ago. It affected my walking but I always use a stick anyway, to help with balance and I have a wheelchair at home for when I have a really bad spell."

"When I was first diagnosed as a teenager, I didn't know anything about my illness. Over the years, I have discovered a lot but it's been a long process so I want to share my information to hopefully help the next generation. Furthermore, my condition can be hereditary so I keep a close eye on my children, but signing up to the HealthWise Wales survey is just another way I can play a part in their futures."

Researchers will use the data to accurately determine the link between health and lifestyle patterns over a significant period of time, which may help identify the root causes of diseases and their management and treatment.